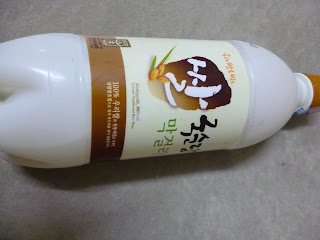 Monday I went to Korean fair at Isetan, KLCC
OMO! feel like in Korean.
Spoil with Korena food choices.
I don't miss the opportunity to get myself one big tupperware of Kimchi....
Since I am one avid fan of Korean Drama.... always see this drink called makgeolli in the drama.

How they make this makgeolli?
It is made by steaming glutinous rice, non glutinous rice , barley and wheat flour, mixed nuruk (sugar and yeast fermented), malted yeast and water and fermented.
The mixture is pressed to separate the liquid from solids. The liquid is drinkable soon after straining out of the mash without further process such as distillation.