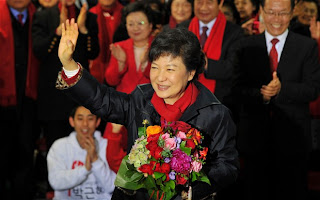 Jeng jeng.... South Korea's first female president...Park Geun Hye.
She is not an ordinary Ajumma, ok!
This 60 years old lady has a degree in engineering from Sogang University in Seoul.
She was described by her voters as "good-hearted, calm and trustworthy" and with " the power to save the country".
Reading her profile recently really make me admire her courage as woman to enter into politic world.
Brief about her background

* she has never married.... mmmmmm sound like me.
* she has no children....yeah! just like me.
* she has a degree in Engineering .... ah! engineering not for me.
* her father , Park Chung Hee came to power through a military coup in 1961 which set the stage for 18 years of authorisation rule......hahahaha my dad just a normal ranking army.......dad you should work harder to climb up higher!
* Her mum was assasination in 1974....God bless her soul.... mmmmm ...for me at least mum still alive.
* she got the courage to fight against corruptions scandals ....mmmm me? try to run away from all this....WORLD PEACE
* she is well known as ICE QUEEN...... and I am a DRAMA QUEEN.

She changed her campaign slogan from 'National Happinesss Campaign to A Prepared Woman President.
Miss Park...I salute your courage and wish you success to lead South Korea to the next level.

Since Miss Park make the history as the first female president in Northeast Asia.....one word for her 'Chukhahae' 'Daebak'!!!!!