July 23, 2015
The first KL City Grand Prix will be held from 7th to 9th August 2015. I noticed the concrete barricade on left and right at Jalan Sultan Ismail where my office located. WTH!!! They even put high up metal fencing. The road are getting narrower than ever which means the traffic is 'bloody terrible ever since early July 2015.

The entrance to my office is narrower with that 'stupid concrete barricade. Guess what on the 7th Aug 2015 which is on Friday for information.....how am I suppose to go to work????

Heard that they are closing the road even on the 6th August 2015, Thursday evening.

Colleague is very excited about the whole event since he get to see all those super fast Lamborghini cars and on and on and on. To me the whole event ??? Just add my sin even more since I have been cursing non stop due to that concrete barricade and the nervousness of that 6th and 7th August 2015.

Whatever it is if you are planning to come to KL for meeting or what so ever....FORGET IT!!!! You can either re schedule or just change the meeting venue.

This Grand Prix will see drivers zoom off through a 3.2 km temporary circuit (that is why they did that concrete barricade and high up metal fencing) with 11 turns. The track has 16 corners , 10 left and 6 rights which hopefully 'touch wood' this won't be any disaster during that day.

Apparently , we can expect to see those 'dare devil' battle out the streets of Kuala Lumpur at estimated speeds around 200kph.  The winner will be crowned champion of the city. What with that CROWN???? I just don't understand!!!! 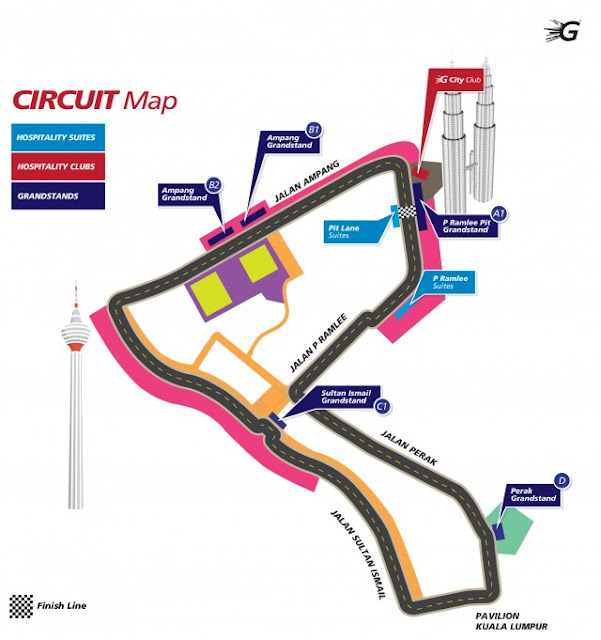 STATEMENT FROM DBKL AND ORGANIZER WHICH IS grand


" Keeping KL moving
Although traffic and access plans have been focused on minimizing disruption as the highest priority, it is inevitable that during the later stages of preparation and during the event, KL will be a very busy place. With more than 100,000 people expected at the race, and all the other things going on around our city, we will be actively encouraging people to leave their cars at home or park and ride and use our public transport system. With two LRT stations (KLCC and Dang Wangi) and two monorail stations (Bukit Nanas and Raja Chulan) located on the doorstep of the event, there is a great opportunity for people to avoid traffic jams and arrive efficiently to the properties on the circuit. "