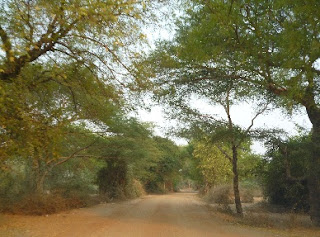 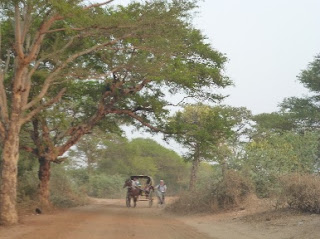 They just came back from temple visiting using Horse Cart and bicycle. 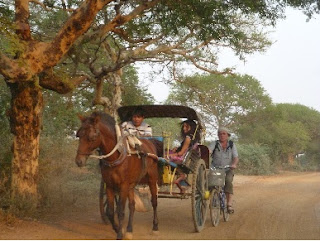 OMO!!!! so dusty road!!!!
The girlfriend taking horsecart and the boyfriend follow closely with bicycle...
Not bad huh!
I was thinking to rent horsecart too but change my plan last minute after seeing the dusty road and the hot weather when I reached there.
So I ride on Kyaw Swe's Sedan car for my entire trip in Bagan...good choice!!!! 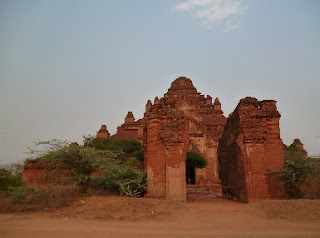 Walah!!!!
I am here !!!
Right in front of me is the great and most massive sturcture in Bagan.
Looking at the structure, this is almost similar to another famous temple in Bagan called Ananda Temple.
This temple was built in A.D 1167 - 1170 by most cruel King called King Narathu @ Kalagya Min.
Half complete due to King got Assassinated by the Indian's King before the completion.
﻿ 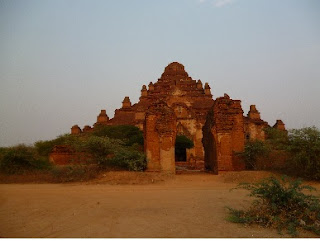 I can feel the dark forces inside this temple 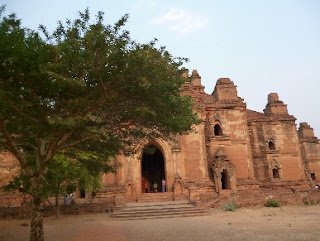 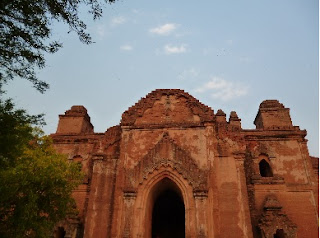 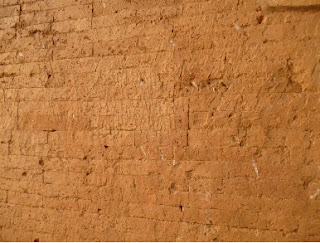 One can't insert in a needle in between of these bricks layed.
This is how meticulous is this King when he personally supervised the construction of this temple.
If he tested the needles can go through in between of these bricks......
Hohohoh...hhahahaha huahahahaha (immitate the cruel wicked King's laugh)
Chop off the hand!!!!
Many died because of this...
WICKED!!!! 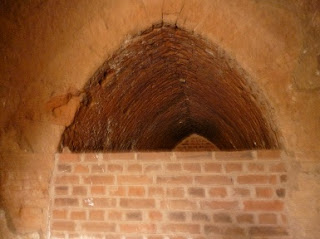 Almost all the entire inner of this temple has passage, however, it was intentionally filled with bricks rubble centuries ago.
Why???
This is mysterious!!!! 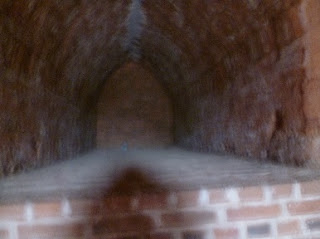 The mortarless brickwork at Dhammayangi, best appreciated on the best terraces and is said to rank as the finest one in Bagan.
Oh! well...nobody have the liberty to visit the highest terraces.
Why?
The hidden stairways leading to them are now off limits to visitors.
Why?
The foundation of this temple is weak so it was closed to visitors to go up there to preserve the existance of this untouched temple since centuries ago. 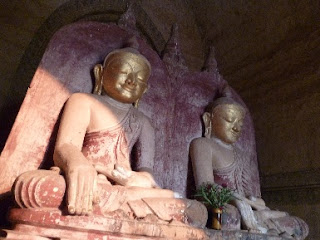 I was told the King purposely built these two statues as redemption to his Father and Elder Brother.
and I said this....duh!!! too late!!! and aporlogy not accepted!!!
Well the story is like this...
This King Narathu is the second son...it is the tradition in Bagan if one to be King must wait for his turn. In this case this King Narathu..by right he can only be King after the Father and the Elder Brother died.
This King can't wait...aisssshhhh...'power crazy King' huh???
He killed his father with pillow when his father was in middle of meditation.
Then he invited the brother for dinner...he poison the Elder Brother food.
Father and Elder brother died....and horrrayyyy!!!!
Narathu become King Narathu!!! 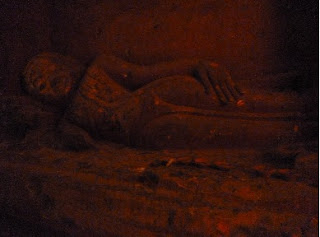 This woman statue is said to be King Narathu's wife the Princess from India.
Sorry ..I forgot to ask her name.
This statue again was built as redemption for his wicked decision to kill this Princess.
The stories I heard was , King Narathu killed her because he was displeased by the Hindu rituals and some said King Narathu killed her because he don't like the Princess's dialect when she spoke.
I guess the Princess's not fluent with Burmese language???
Perharps???
The Princess's father revenge the murder of his innocent daughter by sending 8 officer in the disguise of the Brahmans and assassinated King Narathu in this temple.
That is why many said this temple is haunted...
huhuhuh...wicked!!!!
Whatever...people say about King Narathu... I can feel him...hope his redemption is acceptable by those he wronged!!!!
May God bless all the SOUL in these temple.
Excuse me!!!! Who am I praying for now????
hehehehe... I got a little bit carried away and was into the drama...for a while....
Snap out, Woman!!! 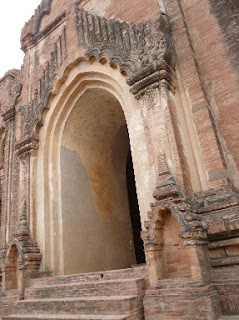 The photo not that clear but the craft in this temple mainly sea monster eating another animals....why???
I don't know...hehehe WICKED and MYSTERIOUS !!! 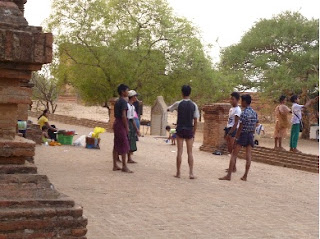 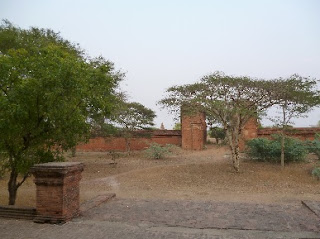 The time almost up for today... 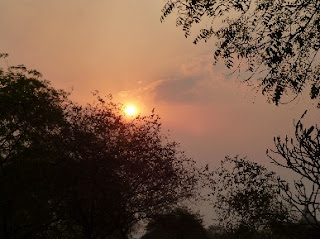 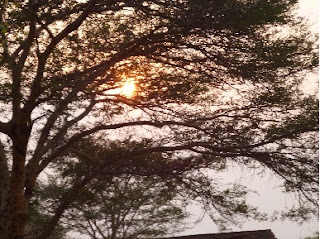 Kyaw Swe is telling me to hurry for our next destination to view the beautiful sunset.
I am coming Kyaw Swe!!!!
Off we go.... to climb another temple to view beautiful sunset in Bagan.
I am not going to write about all the temple history here but I will highlight few.
Serious!!! I visited many temples and Kyaw Swe has done good job explaining and related each temples.
For those who want to visit Bagan, you can contact Minthu via this website.
You won't regret...they provide great service and very knowledgeable too.
The best way to tour Bagan is to know the history and also archeoligical and all these experience you can get through Minthu and his older Brother Kyaw Swe.
I got their contact from Trip Advisor and apparently they are highly recommended by satisfied people who has been receiving their service.
http://www.minthubaganhorsecart.com/
http://www.horsecartbagan.com/
Minthu.
Ph : 09-43149273
email : minthu.bagan@gmail.com