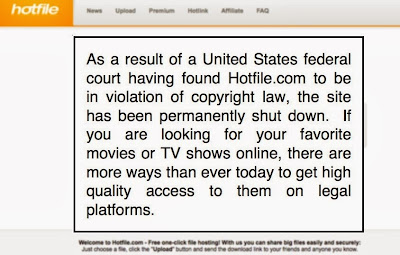 This is what happened when I visited hotfile.com this morning.
I was using it yesterday though!!!!
After some google search trying to find what is happening to hotfile.com. This is what I found...

Apparently, hotfile forced to shut down operations and need to pay $80M to movie industry as part of a settlement with the Motion Picture Association of America (MPAA).


Hotfile is one of prominent cyber locker for people to swap digital files.
Sadly I am on of their premium user, ie. paid user.
Here goes my cash. The subscriptions still has another 5 months to go.

That settlement amounts is a Victory for hollywood interests but a lost to me. WTH!!!

MPAA argue this cyber locker are a vehicle for a piracy. Whatever, the opponent argue...still the winner for this lawsuit is MPAA which apparently since Feb 2011.

Initial defense by hotfile on the copyright -infringement charges, which claiming on protection under the Digital Millennium Copyright Act, was rejected by Court.

R.I.P hotfile.com. I miss you dearly!!