KOPI CLUB - NOT EVER AGAIN! 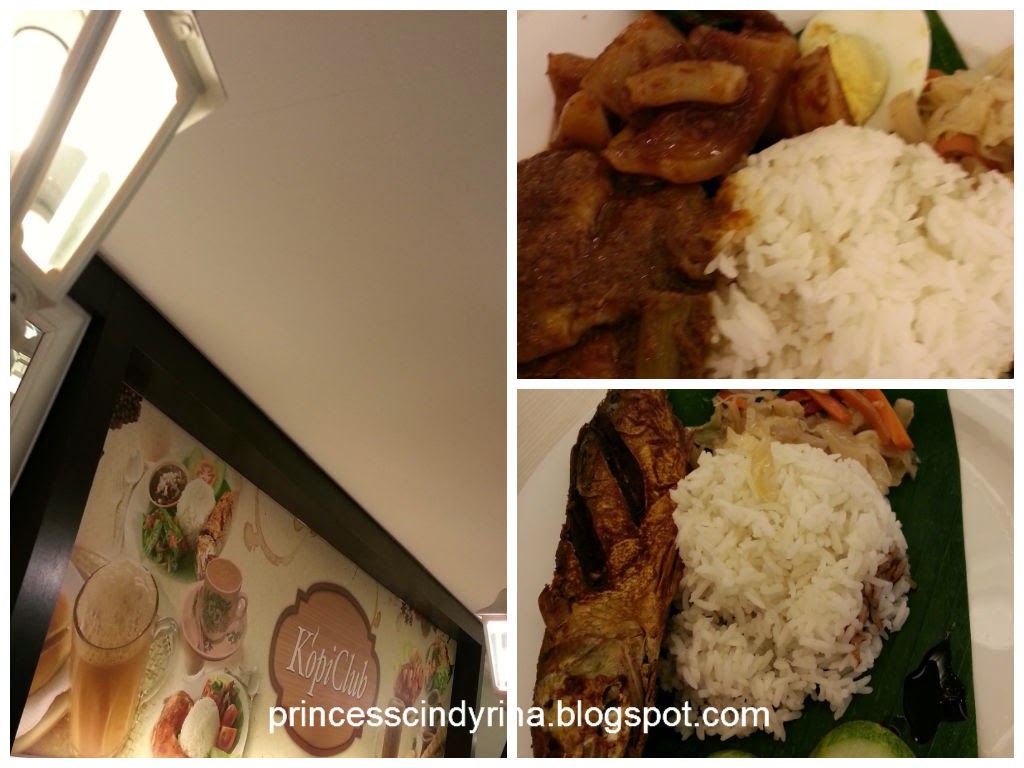 I really craving for simple fried mackerel with turmeric. Co incidentally, we were at Sg Wang Plaza at that time. It was late...due to this Chingu got carried away with his sport shoes shopping.Yeay! suddenly this fella taking up hiking. So need pair of shoes suit for that.

People so free horrrr...go hiking every morning.
No need to work ar Chingu???
Apparently this is work too...because accompanying the Boss!

It was almost 9:00pm when we decided to have our dinner at Kopi Club just because the menu have this Indo rice...I guess the name is something like that in the menu. It says the turmeric mackerel will be freshly fried and will take around 25 minutes. huhuhuh..IMA go slurp! I need to order this.
Chingu ordered rice with spicy squid and chicken rendang.

Both normally never eat dinner this late!
But seems I am craving like that....we ate for my sake...muahahaha

Chingu's dinner came first.
Damn...cold rice with squid which taste like paper. Yeay yeay I had eaten paper before that is why I know how it taste...
Don't talk about the veggies...it was like died veggies...yeahhh...chingu eaten while telling me..he will blacklist this Kopi Club.
Me said not yet...wait for my freshly fried turmeric mackerel first.
Seriously, I am that kind of person who never waited for this long ...and for this I waited more than half and hour.

When that time I ordered...the fish at their restaurant finished.
He  can't cancelled my order because the so called Boss has done the closing and left the restaurant.
When Chingu asked him why took them so long????
They went out to buy that fried dead wood fish from other restaurant.
By the way it was not even re heat...it was cold!
Of course the excuses are not acceptable at all.
We don't have energy to even argue for food!
Anyway, we are facing Bangla the mere worker...not even the Boss!
This poor Bangla worker not even get wage worth to receive such 'right' that I am going to fight over...

At first we felt like not paying a single dime for this....but then Chingu being him...don't want to owe people. He said let them owe us.
We paid and left with such a miserable dinner experience.
At that moment ...both of us just thought that it is not our fate to have such a good dinner as expected!

By the way...the have 2 outlets that I know of...one at Sg Wang Plaza and the other one at Low Yat Plaza.

I am totally blacklisted Kopi Club!!!!

Mummy!!!1 I really miss the hot freshly fried turmeric mackerel!!!!
Why I don't fried this myself???
I don't want to look bad by just buying only one small fish....and the hassle to clean the fish...to fry it...such a messy scenario to imagine...Gosh!!! such a lazy woman...full with excuses...hahahahaha