You need just A Day to cover the whole Labuan 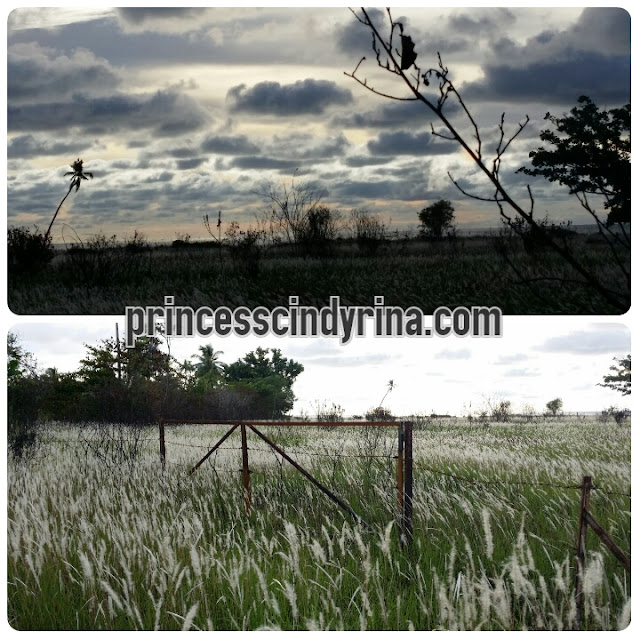 I was a Labuan last 2 weeks and what I miss is not the place but the awesome beautiful view over there. I think can spend hours just to look at the cotton candy like clouds and smells the fresh sea breeze. The beach view is spectacular to my eyes.

My Boss sent me over to Labuan for some works. At first he wanted to stay there for a week which I gladly shorten it down for him to save the accommodation cost. Thank God! for my quick common sense to shorten it down. If I don't do that...I think my life at Labuan will be boring to death!

Ahhhhh... how to describe Labuan with one words at one glance?

The memory of Taiping, my hometown where I grew up 15 years ago keep coming back. Am I back to the past? I feel like slapping myself to that when even see their so called the most famous and best shopping complex. WTH!

Where to visit in Labuan ?


Financial Park Labuan, Jalan Merdeka or 'Ujana Kewangan' in local terms ,which is where my office situated.

The best shopping place is Ria by Parkson. The best hypermarket is Giant. Don't even ask me how big is both places and what they sell. Talk about convenient Financial Park Labuan is very convenient place because all you need is here. Bank, IRB, LFSA, and Post office is all in the same building. They even have KFC and Pizza Hut there too. The retail shops in that building is lil bit ...mmmmm... don't know how to describe. It seems to be a rather odd mish - mash of random retail shops. I guess because Labuan is just a small Island. Labuan people normally shop at KK which is like 1 hour ferry ride. You will reach Dorsett Hotel with just less than 5 minutes walking distance from FPL.

I have super big complaint for Financial Park Labuan. Its their bad condition toilet.
I am one frequent toilet visitor. WTH!
Don't judge my short bladder please! eheh...
Toilet condition is always a big big..I mean very BIG issue if its not clean. Too bad for me. The moment I walk into the toilet at Financial Park Labuan....HORROR!
Is this office not in Malaysia? Am I in China? WTH!
Dirty! Foul smells!
I was told the cleaner has been absence for many days. So unfortunate of me.
Even though if she come...what difference can she make????  This place need total refurbish! revamp!
Trying to stay positive. I went on to check the toilet at different floor. NO HOPE for me. I should have shorten my stay here again. But the flight need to pay penalty and surcharge cancellation for my hotel too. Haihhhh!!! I end up drink less water possible just to avoid going to toilet. That was my antiques rant for toilet at Financial Park Labuan. 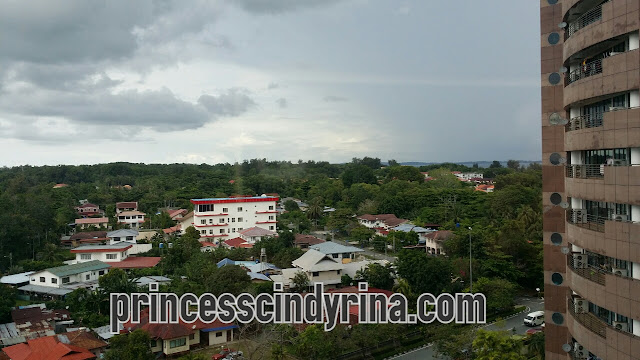 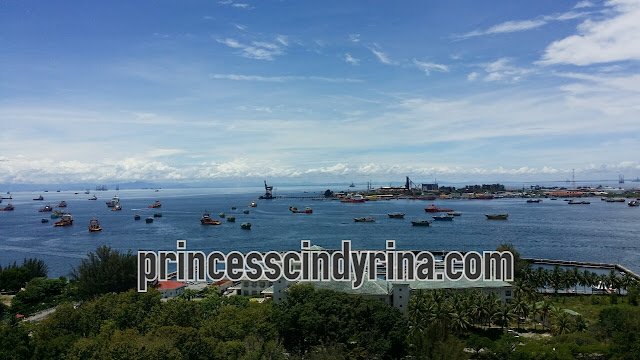 This is the view from our Company Secretary's office. WTH!!!! cool view. Imagine the light from the ships light up at night. Wow! its going to be awesome view. I was told they have sunset view from here too. Heaven!

This room with this kind of view was rented out to some other lucky people with USD1,000/ month. It just one small room with one small table and chair. Oh! plus the phone too which the charges will be in separate bills. WTH! 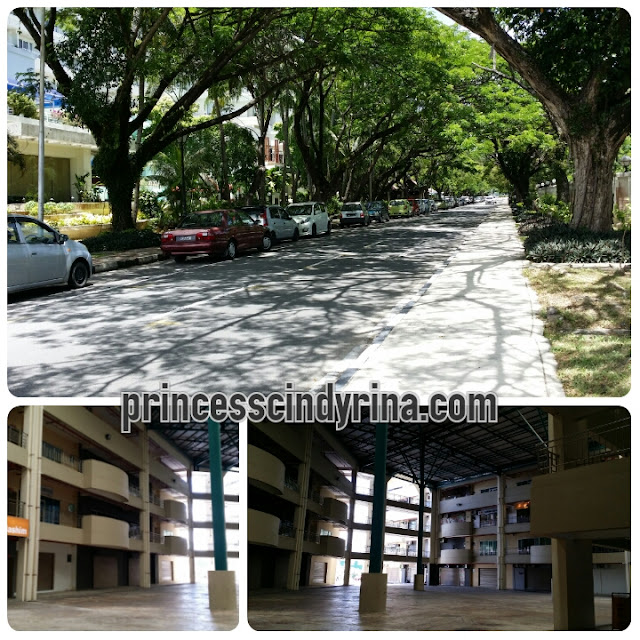 Lunch time, instead of eating Pizza or KFC ,we decided to eat at the coolest cafe near by name 'Chill Out. I was told it situated at Labuan Square. Me and my ex colleague walked all the way to so called Labuan Square. I love the walking path to this place with all those green trees arch. It was like less 10 minutes journey from my office. Reached there!!!!!!!

Labuan Square? Ohhhhhh!!! really square!!! Am I dreaming???? April Fool? Yes! you see it right! That look like abandon building is Labuan Square. The best prank of all...the cafe was closed during my visit. So called lady luck not on my side. So you can skip this! You can visit Labuan Museum just nearby this Labuan Square to kill your time. It would be interesting but I skip it because too hungry.

Then we decided to check out the only one Japanese Restaurant in Labuan which situated near Marine Aquarium. Just next to it. We finally have our lunch! 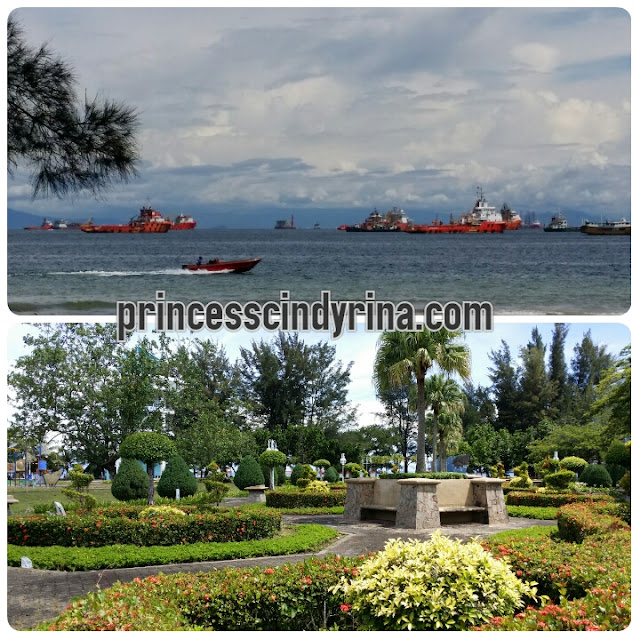 Then walk at the nearby park. According to my friend, we can rent a bike and cycle at near by. I think that cycling activity will be best here. The view are beautiful too. This is the view I saw from Company Secretary's Office. Now its just before my eyes. Awesome !!! Labuan International Seaport view from near. 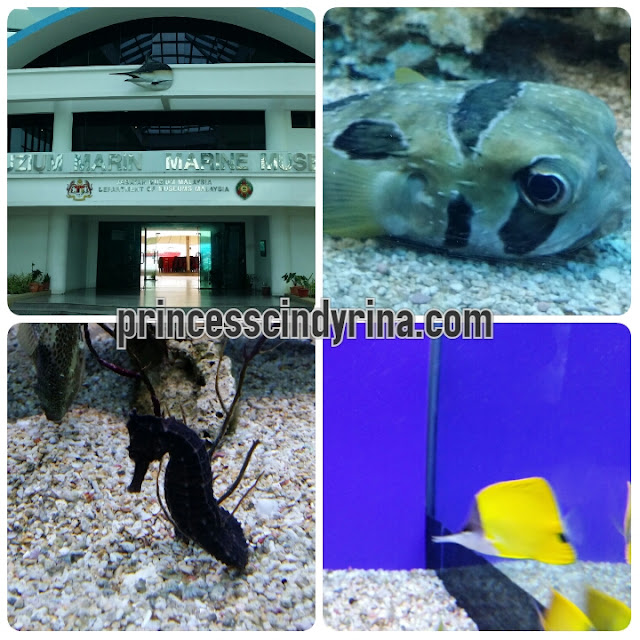 The Marine Aquarium next to the Japanese Restaurant also good to kill your time. Its free. Don't expect Seaworld in Langkawi ...ya. Still ok to visit because there are some sea creatures for your to see and pet. They change it from time to time. 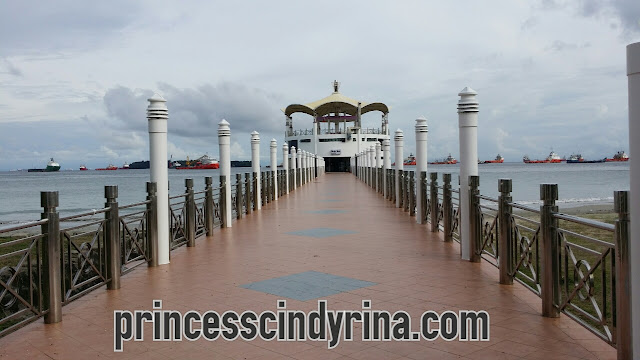 It will be a nice evening walk near Marine Museum. Love the view here. But this photo was taken under scorching hot sun. WTH! No worry about the sun tanned. My skin just gotten brown ever. 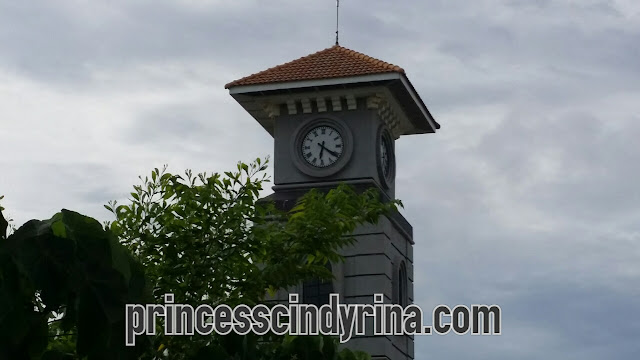 Don't forget to drop by the clock tower which is next to Marine Museum too.

We then decided to go off a bit earlier since this is her last day with the company. So called farewell dinner is on the way. My treat especially for her!  But too early for dinner. She is super kind to me too . She brought me around on tour for the whole Labuan with here brand new sweet mini car. My other friend at Pen. Malaysia, were asking me...did I really come to work or travelling.
My reply....I work smart not hard so I got to enjoy both at the same time. WTH!

One must visit place in Labuan is Chimney Museum. Seriously the view was awesome throughout the journey. 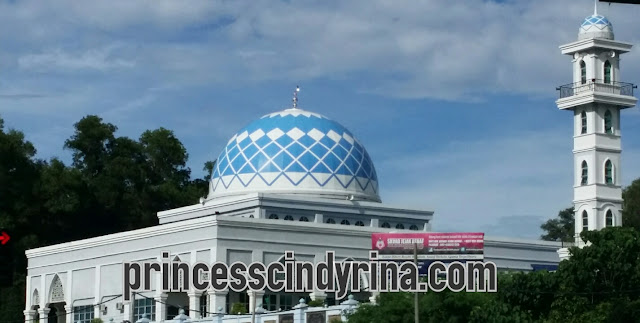 Snap this beautiful blue mosque when we are stopping at red light.Many big and beautiful Mosque here and they have some big 'Guan Yin' temple too. I saw it somewhere along the way back. 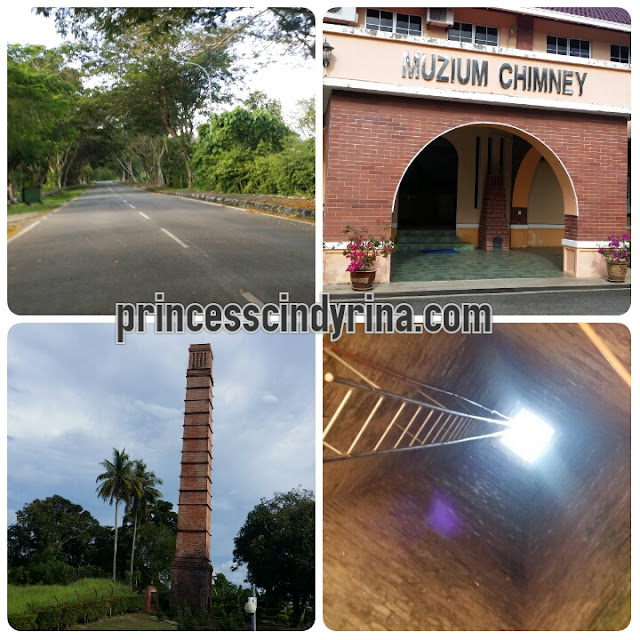 If you are in Labuan don't forget to stop by Chimney Museum.The Chimney Tower is one of the historical buildings in Tanjung Kubong, situated 12km to the north of the city center. The actual function of the Chimney Building remain mystery until now. There are several assumptions to this. However the most common belief it was an air ventilation outlet for underground , but excavation works show there are no structures for an underground tunnel. Jeng! Jeng! Jeng!
Some says it could be lighthouse based on the location at the higher ground and some belief it was a bell tower. But still there is no concrete evidence for all the assumptions and still remain mystery until now. 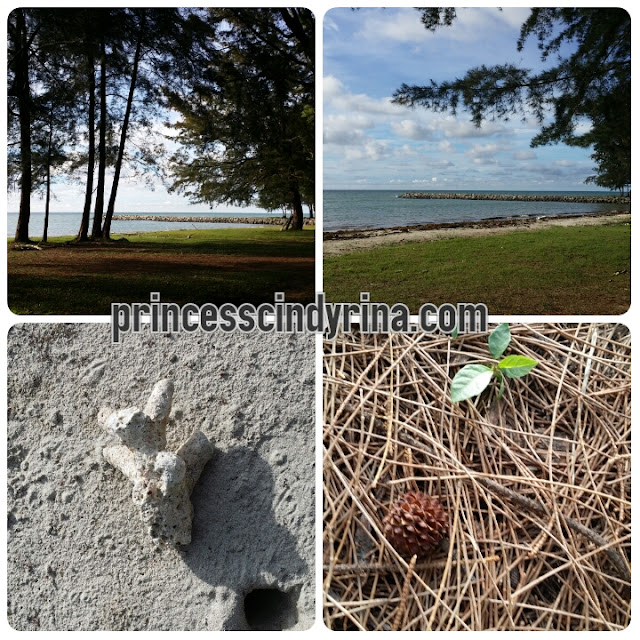 Driving around this small Island is a must if you visit to Labuan. Why? The view...is breathtaking. I am totally in love with the stunning scenery here. 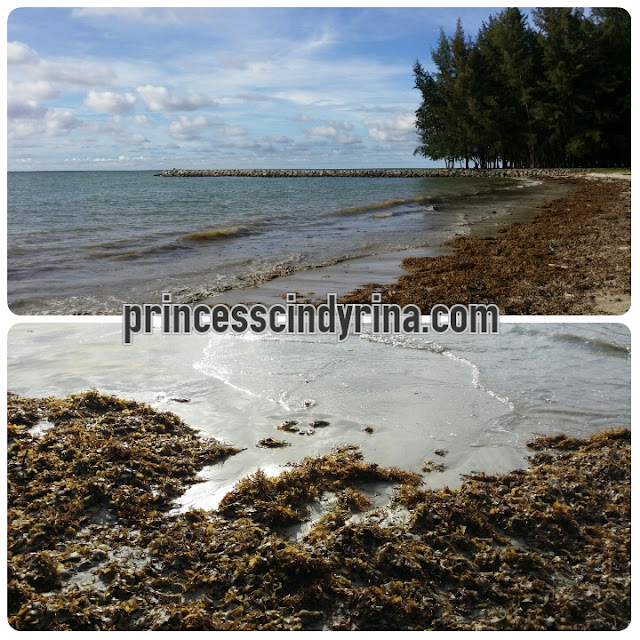 If you have time, do wait and witness the beautiful sunset here. 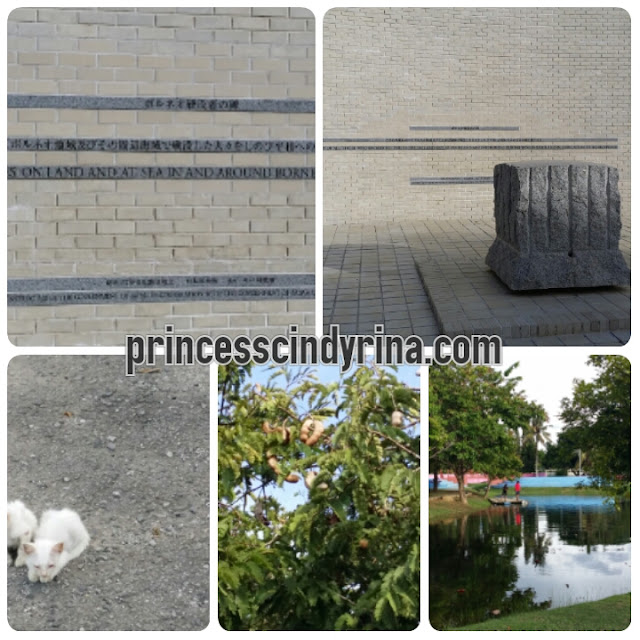 My friend brought me to Japanese Surrender Point in Labuan. Read the history before visiting this place. Its related to WW11. Its a meaningful place. You can also strolling around the nearby Peace Park. Opposite this place is a nice view of the South China Sea on the Western side of Labuan. Don't miss out! You won't regret to see the view here. 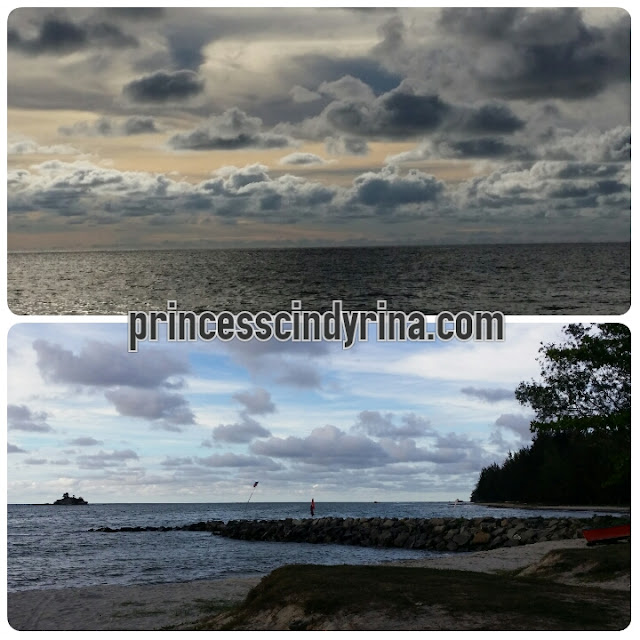 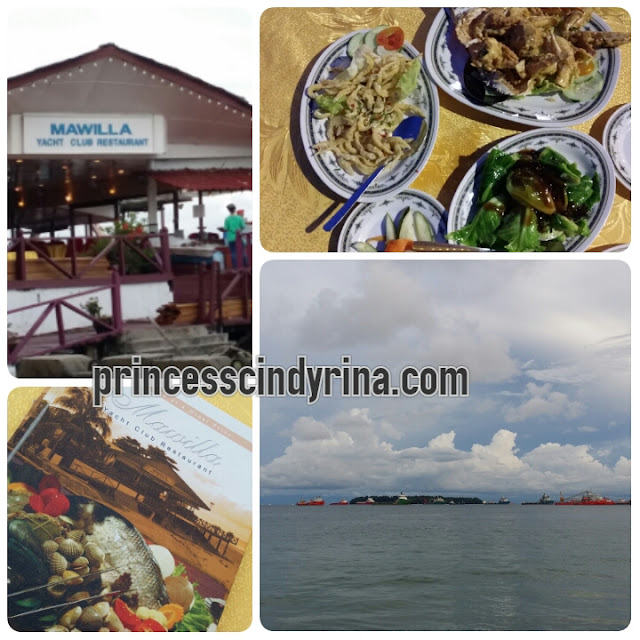 Seafood is relatively fresh and reasonably price here since Labuan is an Island. There are few place to eat this. You can either head to Fisherman Wharf or just find some restaurant overlooking the sea view. I search around and found Marwilla Seafood and another one is Anjung Ketam. Since Marwilla located near the city and not far from where I stay so I try out the food here.

I was disappointed with the quality of the seafood here and same goes to the limited choice here too. I just chose Crabs and Silver Fish. Crabs was just at to par. Nothing to shout out. On the other hand silver fish is something you can dig in for snack or starter. I won't recommend Marwilla to you but you can try it at your own choice. The restaurant will be super pack at night. 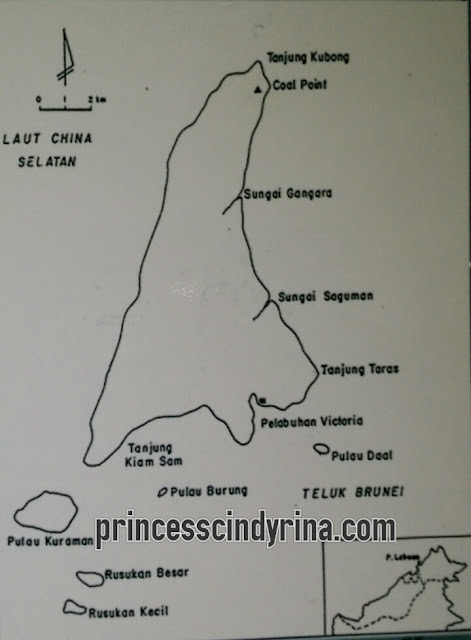 In general Labuan is just a small Island. You just need 2 - 3 hours drive around and you will cover the whole Island. I was dreaming to buy a small house overlooking the sea view here but the property price here is pretty much at high up too. My dreams went black! 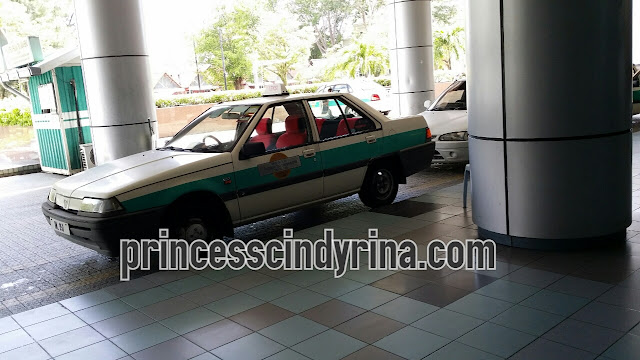 Taxi
You can rent a car to drive around or you just take a taxi. Taxi price calculated by zone. Don't wish any meter taxi around. If you are at airport head down to the taxi counter and by the coupon. I paid RM15 for less 10 minutes ride to my office. isk isk isk ...

Mini Bus
I saw mini van like which is also a mini bus. No...I don't dream to squeeze into one! 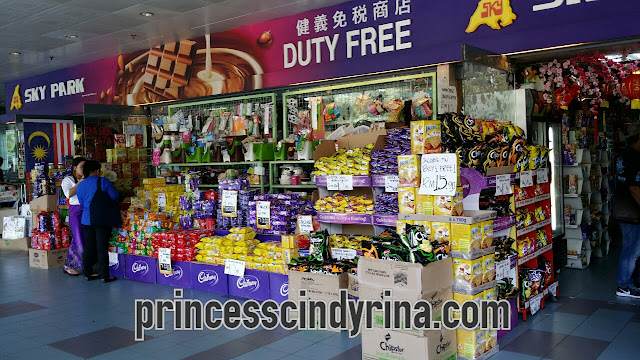 Labuan is a duty free Island. In general there are lots of duty free shopping spree to do. Not sure why..I don't really attracted to do any shopping. I was told there are cheap place to shop for  chocolate  and liquor at lower price here. The place is just the same building my office.I went down to look around. It is super cheap! But.....the expiry date is like less than a month. WTH! Even the simple biscuits and snacks is almost expired. Chehhhh!!1 no wonder it super cheap.

Thats my experience during my first time visit in Labuan.

I would like to Thanks Lidona who was very kind to bring me for tour around the Island and let me experience Labuan for the first time. I wish you good luck in your new job and live happily always. I think the next time visit to Labuan , I will just need only one night to settle my work and no further stays.

To download this article for offline reading or travel directions to the attractions highlighted in this article click here.
By cindyrina