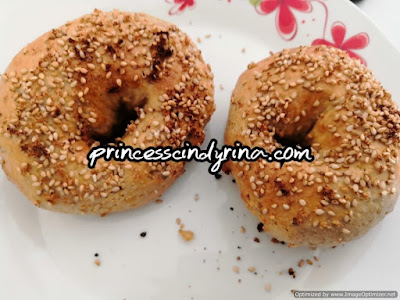 I was craving for morning bagel breakfast for quite sometimes. There is no bakery or cafe sells bagel near my house area. I couldn't drive too far from home during this Restriction Movement Control Oder which only will last until 31st Dec 2020. Hopefully, it lasts by then and no more extension. I bet most of us pray for the freedom again, right?

It was 12 midnight and I still unable to sleep. These days, I have difficulty to fall asleep. Perhaps due to too much computer. I am doing an online study and is chasing after the meet the due date before my course expire. So, most of the time I will be in front of my computer like more than 12 hours a day. But that night, I end up browsing on the easy way to make a bagel. kekekeke

The next morning I tried to make bagel for the first time. The recipe was super simple. Only 3 ingredients and the total time to get a fresh hot bagel is only 15 minutes. Yes! no joke. Only 15 minutes!

How to make bagel in the air fryer with only three ingredients?

Pardon me for the no measurement recipe since I am that type who doesn't measure when doing the baking or cooking. Everything just follows my guts feeling. hehehehe

In a bowl mixed all three ingredients until it forms a dough. I used wholemeal bread flour for my bagel. Tips to adjust yoghurt according to your flour amount. Add in more yoghurt if your dough is too dry. Once it becomes a nice non-sticky dough, divide and shape it like a bagel that you usually bought from the store.

One more tip which I think its important is to boil the unbaked bagel in the hot boiling water for 30 seconds. This will give a nice crispy in the outside, soft and chewy texture in the inside. We called this as bathed the bagel steps.

How to make everything bagel seasoning?

Then its time for topping. I don't have that everything bagel seasoning. So, I created one on my own. In a bowl mixed sesame seeds, salt, garlic powder and onion powder. 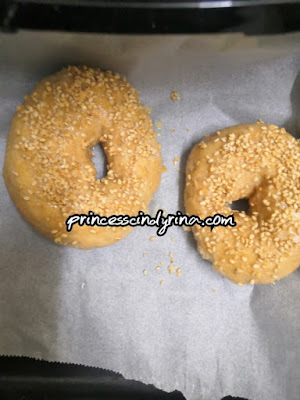 Time to bake the bagel

Ting! Ting! Hot fresh-baked bagel in the morning. I made 2 bagels for only 15 minutes that morning. I am totally proud of myself since it was my first time and I did it well! I feel so carving satisfied that morning.