September 22, 2014
I visited Beijing on September 2011.
It was interesting journey since I wonder to the foreign country without learning any of their mother tongue language. The reason I chose Beijing because of I wanted to full fill my long time dreams...I want to explore Forbidden City and Great Wall of China.

I visited both and Forbidden City just a 10 minutes walk from my Hotel and I love the feelings of walking by the river and enjoying beautiful scene of Willow tree dancing to the wind...owhhh!!!! and also peeping on the imperial guard practicing martial art at Forbidden City.Those Imperial Guard...whoa me with their martial art skills! Their Body Build are to die for by most man! WTH!
Snap out Rina! kekekekeke...'hamsap thinking' for a moment.

Food is like heaven for people who really can eat and also know what is their orders!
To me is like gambling by pointing my fingers to those words that I don't even know what am I pointing at! If lazy to gamble just point to the next table dish and give sign that I want to order the same. Seriously, its fun to surprise yourself with food serve to the table! The not fun is if the food turn out sucks or a bit too much to finish it just by myself and everybody give me that look...like wow one rich girl...ordered so much and 'tapau' back because she can't finish the food!

My adventures with Beijing food begins with..... 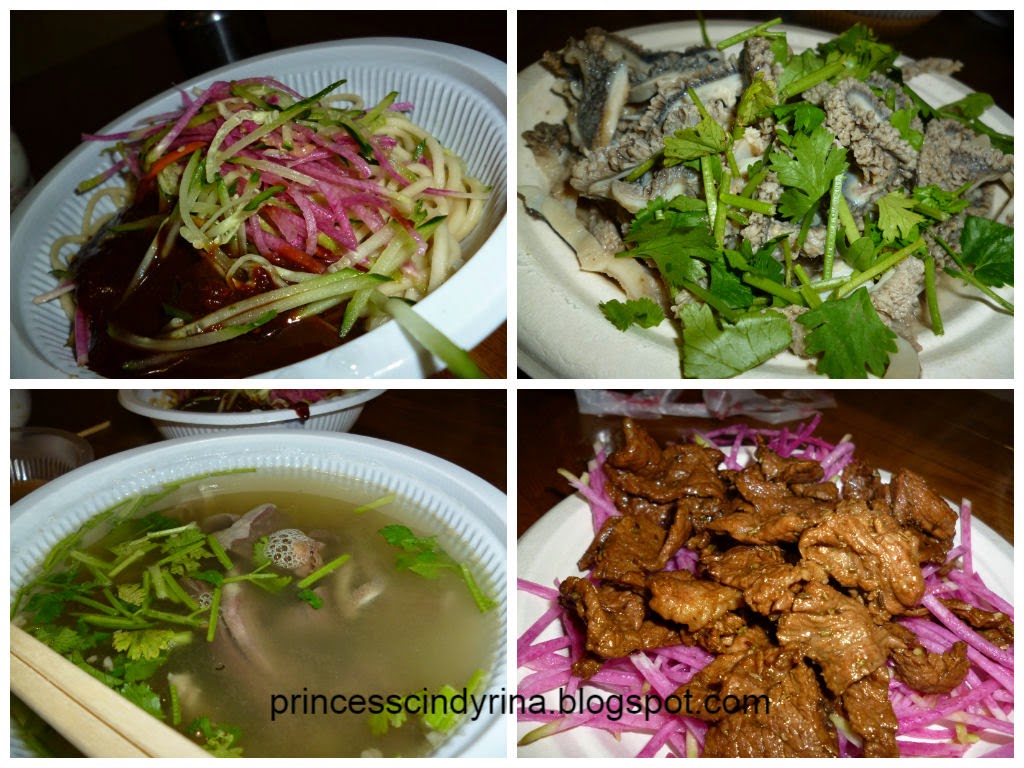 First night in Beijing, since I was staying very damn near to Wanfujing Street , the famous street food in Beijing...well just like 10 minutes walking from my Hotel. I tried Uyghurs food. Uyghur people is from Western China and mostly run Chinese Muslim food.

Since there is no English words and photo...I just use my pointing game.
Seriously my pointing game is quite bizarre!
Reason I am not that kind to point to just one item in the menu.
You see that result on the photo.
That was the result for my first night dinner in Beijing!
WTH!!!!!
It turn out mostly lamb meat.....otteoke!!!!
Of course...the greedy woman end up with too much left overs!
After this trip I really learn my lesson and try not to be greedy woman in the next trip!

Bottom Left : Meat soup...which I can differentiate whether its lamb or beef. All I know the soup is damn smelly with animal smells. isk isk isk

Top Right : Stripe of lamb intestines...oh WTH!!!! Seriously, for not so meaty person this one...really can't swallow not even a single stripes of this fella. Apparently this is faomus Beijing Muslim food called Bao Du. Stipe of sheep or cattle. They boiled it with water and dip it with sesame sauce and before I start my journey to Beijing I read this is their famous snack and everybody seems to love it! Oh really??? Not my taste then.

Bottom Right : Grilled lamb taste quite nice since it was grilled with lots of spices! But i can't finish since its too much! 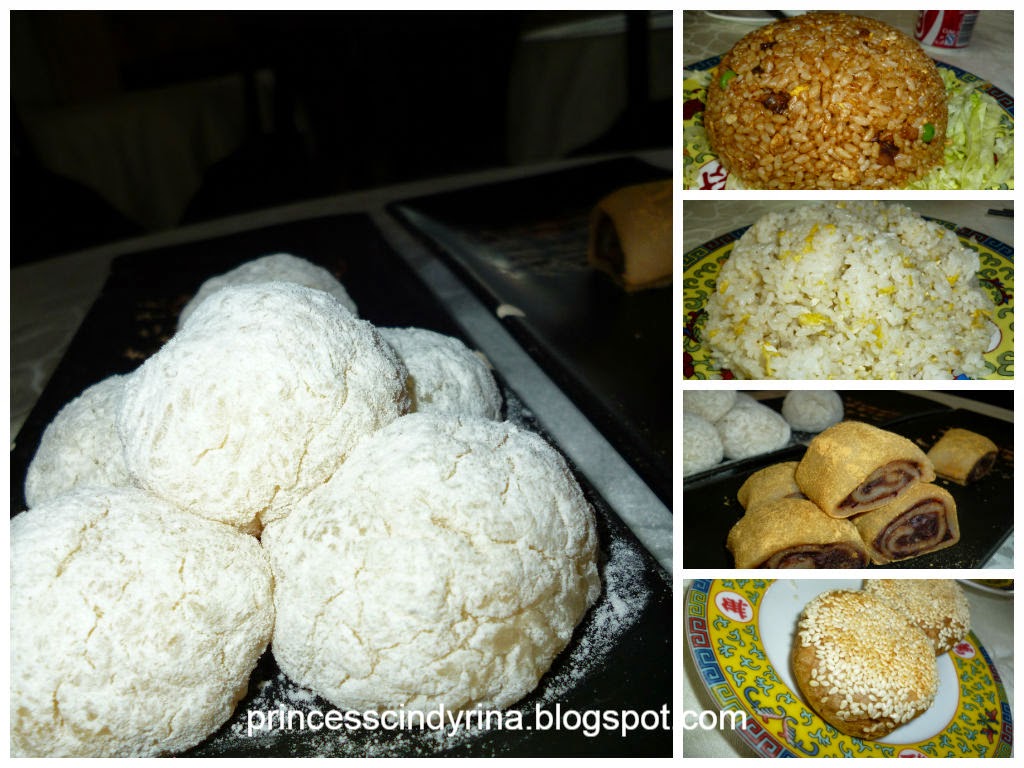 This is my second day lunch adventure.
I still use my pointing game and I thought it come with small portion of dessert.
Who knows...it turn out to be 2 plate of fried rice and 3 desserts.
WTH! The woman who never learn the lesson.
Seriously, I already received my punishment when I back here after the trip!


Left :Sticky rice with sweet fillings (Ai Wo Wo)I like this one though not that sweet for me to eat and the taste quite special.This was once a court snack in Yuan Dynasty. Sticky rice is first steam , pounded into pulp, shaped into a ball and then filled with sesame and white sugar , pea flour, jujube paste then spread over with rice flour. Frosty look, taste smooth and the fillings is fruity sweet....mmmmm yummy!!!! This one I ordered use my internet print out....telling AI WO WO!!! AI WO WO!!! to the waiter and waitress and pointed to the photo from my print out! hahahaha success!!! I got my AI WO WO...

1st Right : Century Egg and Lamb fried rice. This one very delicious and full of spices.
2nd Right : I called it the bland fried rice with egg. So tasteless!
3rd Right : Famous muslim snack called Rolling Donkey (Lu Da Gun) -this cake made of steamed glutinous millet or sticky rice, scattered with bean flour and filled with red pea. They cut into blocks and rolled in soya bean flour. When roll it in soya bean flour it looks like a donkey rolling on the ground , raising dusts.so this is how the cake got its name..... taste??? I like it!!!!
Same with this one...I go 'LU DA GUN!!!' LU DA GUN'!!!! to the waiter and waitress and success!!!! I was served with my 'LU DA GUN'!!!! Syiok wor!!!
Right Bottom : Sesame seed bun with can't remember the filling in eat.I 'tapau' back to hotel most of this food and eat it for tea time and dinner.

This food nice and good choice but too much for lone ranger traveler like me! 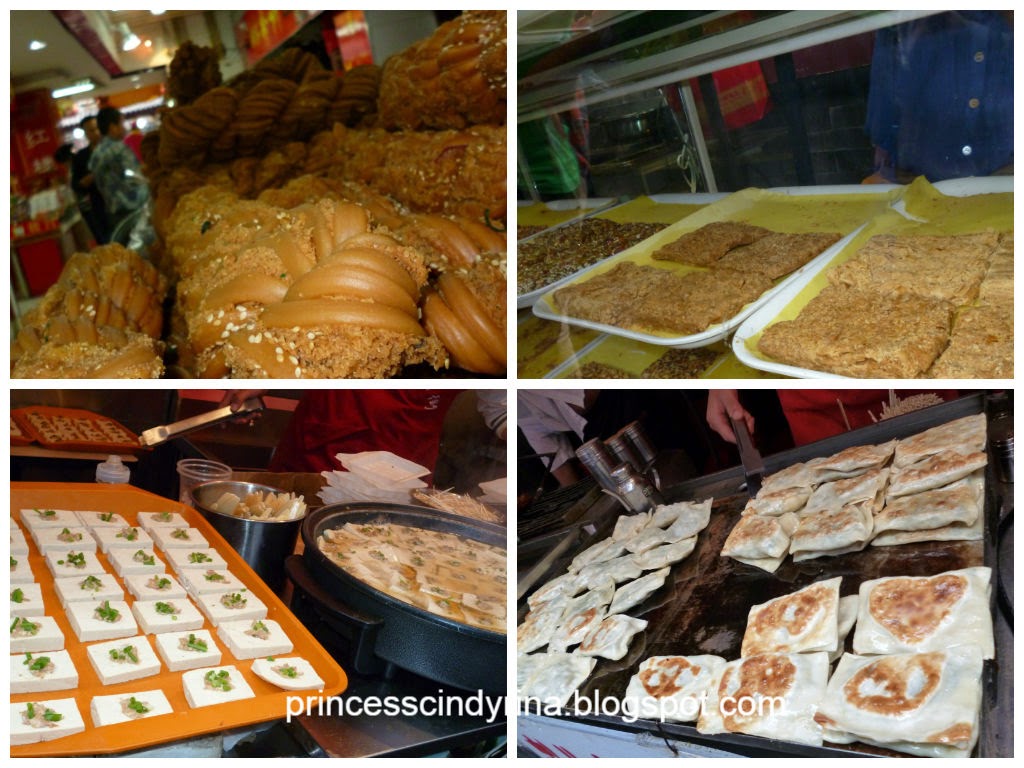 Almost every night I visited crowder Wangfujing street and just look see look see the bizzare and weird food they are  selling. Really interesting for me. Totally first timer when it came to all this weird food.

Since I every night also pass through the street most of the street seller kind of recognised me since I am so different look from them. To me most people I met in Beijing is pleasant people! Gosh... when they shouted...
'Lady!!! where you from?????'
Me will replied them back enthusiatically....Singapore!!!!
sometimes ..just shouted back Malaysia!!!!
Then they will go SIN GA POREEEEE!!!!
Or...'Ah! MA LAY SIAAAAAA!!!!' APA KHABARRRRRR????'
Me just walk and hehehehehehe 'NI HOU????"
....shy lorrrrrr...too many people!!!
WTH!!!!

Beijing is my 2nd time in China. I visited Shanghai and Hanzhou but not free and easy like this. That one was under Company and with my other office mate. So don't have chance to explore like this trip! I kind of love free and easy trip because I am not that kind who like structured thing. I love this kind of adventures! 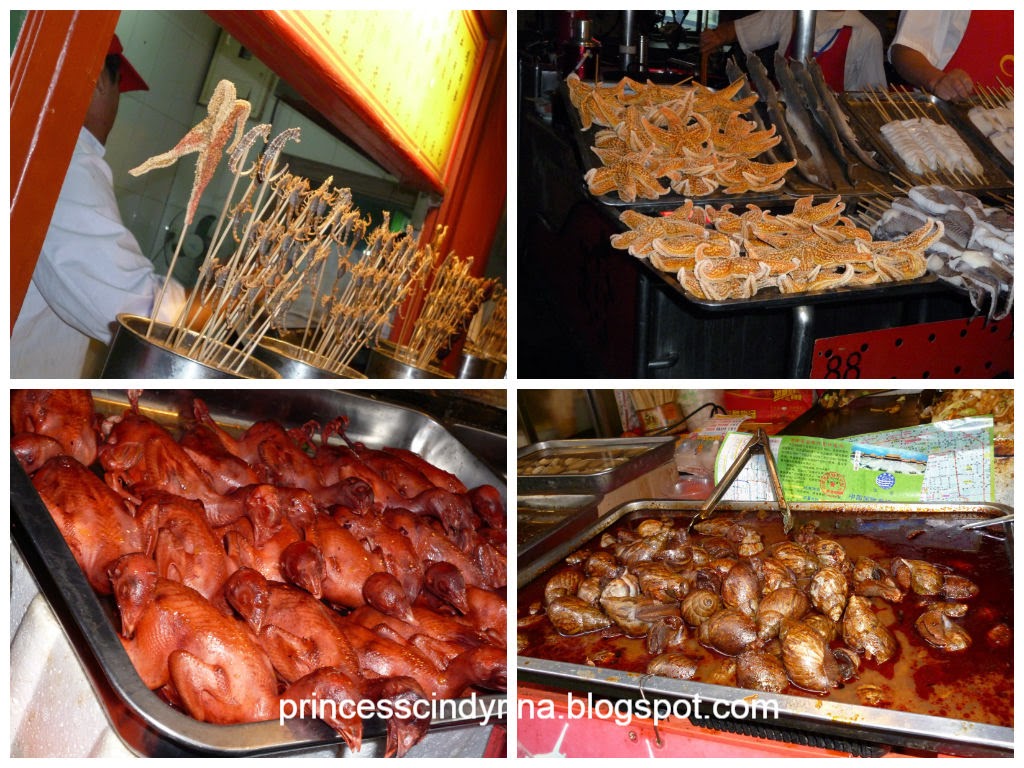 OH MY GOD!!!
Look at that poor dead creatures!!!
You dare????
There are some photo of the snake too....but I unable to retrieve my old photo due to some system breakdown to my external drive.

So all of you the 'siput babi' also can eat wor!!!!
They make curry with it.
They also sells Baby Shark Curry!
Oh my God!!!!
They eat whatever on earth!!!! 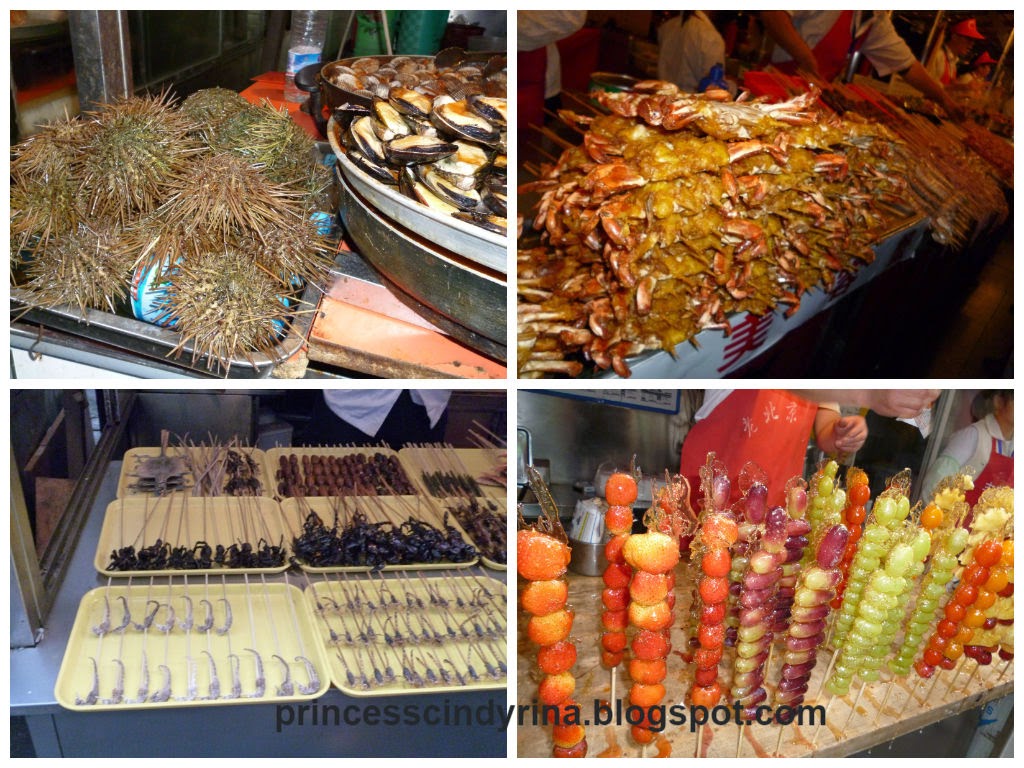 Those clams and crabs really look tempting but since this people mix it with other food...I feel I can't even want to swallow it! So don't try le... 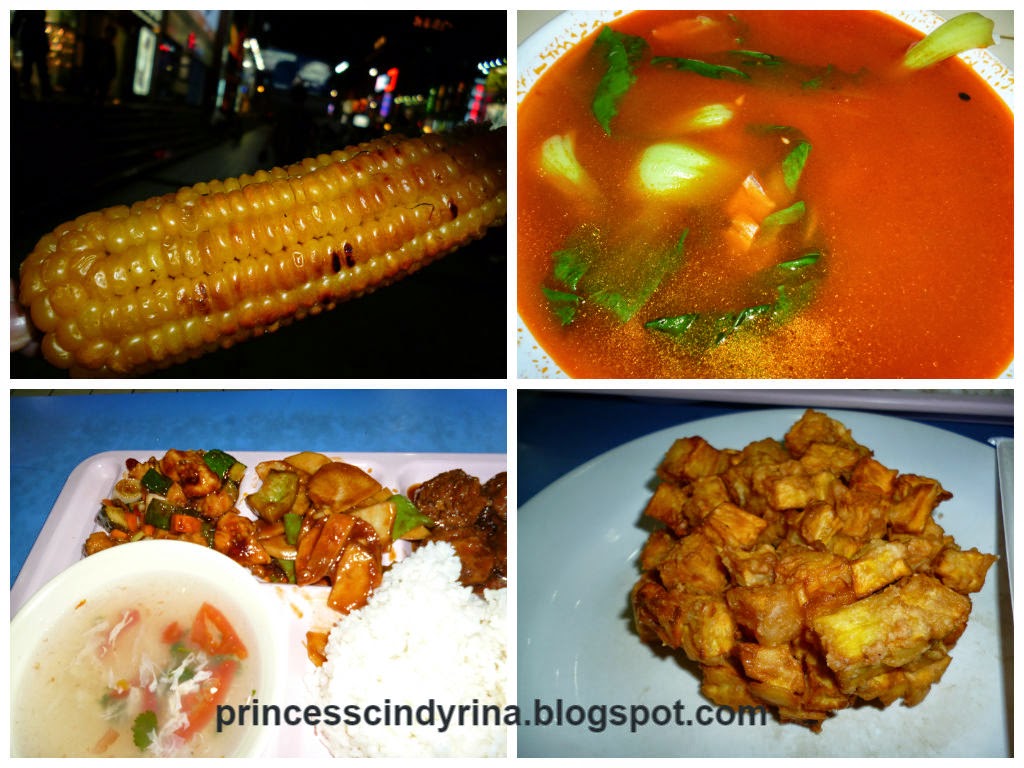 Top Left :I tried Beijing Corn...it so sticky to my teeth and to me I love the sweetness of our Cameron Highlands corn better!

Top Right : Spicy Lamian which I used pointing game to the next table. End up they served me this super duper burning spicy lamian...lamian is at the bottom and it was served in extreme big bowl. Oh myyyyyyyy..... This one I dont do the extreme food order but it came with one damn big bowl of lamian...and this enough make me...like garfield with butt stuck on the chair.

Bottom Left : Mixed rice which I ate at Niu Jie Street...WTH! not my taste bud lor!!! 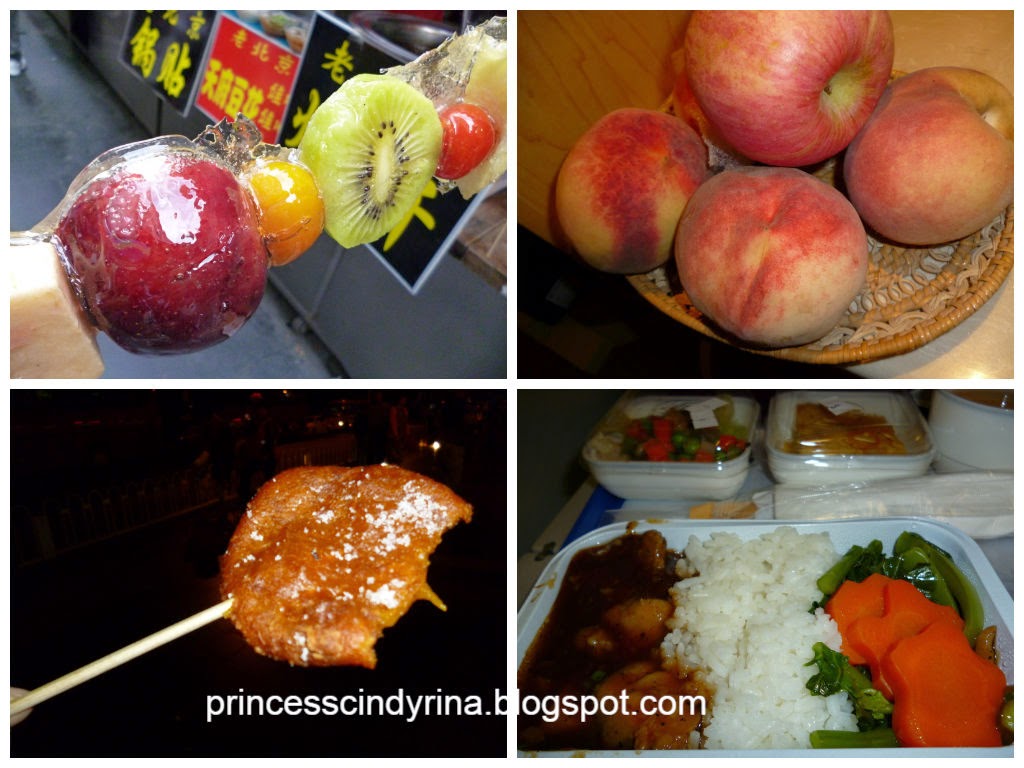 I am not that sweet tooth kind of person.
Since I feel so frustrated with my extreme pointing finger and surprise me with food which don't really suit my taste bud.
I entertain myself with this sweet fruits candy and pumpkin stick dessert.

One thing I love about Beijing is the peaches and apples. I bought this fresh deliver from orchard...of course that Beijing Uncle don't give slaughtered price. I give him sweet smile and I get to buy peach with RM1.50 each. Damn big and sweet and juicy and delicious and fresh  and crunchy and bla bla bla! Gosh! I bought back few of them.

When I board plane back to Malaysia..I never feel so happy like this...Malaysian food at last!
Even the plane food taste this awesome!!!!!

When I recalled back my adventure and experience....ah!!!! priceless!!!!
I love it and still love it!