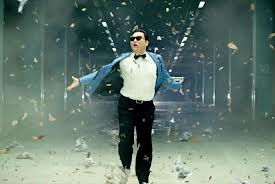 Oppa Gangnam Style craze is everywhere now...
Totally like Macarena craze once upon a time back then...
Who is Psy the person who responsible to make even popular Canadian singer Nelly Furtado to dance that horse dancing on stage in her recent concert in Manila???
He is PSY!
Born as Park Jae Sang (PSY) in 31st Dec 1977!
OMO he is 3 years younger than me??? He is so Ajussi look!!!! and I am his Noona???? Unbelievable!!!
He is korean hip hop singer and popular with his sense of humor and uniques concert!
He received education in US.
It is really amazing that a non korean idol parodied this song and really proven how influential is his video. His youtube MV hits more than 65 million...wohoooo!!!
Psy totally going viraland everywhere.

He is on DAEBAK bank accounts with CF deals! Estimated income received from CF deals around USD400k per endorsement and gangnam style promo is around USD10 millions.
Many other revenue streams coming in for this OPPA who really now can afford a property in GANGNAM!

You are well know internationally!!!
By cindyrina