I am taking my sweet time to update my solo travel adventure in Seoul.
On Thursday, 14th Nov 2012, I was very excited about this trip to DMZ , Pamju and 3rd Tunnel. 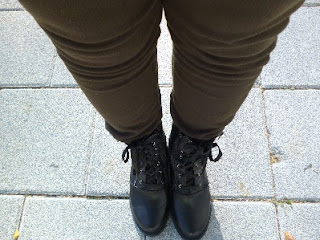 My new military boot, I bought the night before DMZ trip at one of the shoes wholesale market for 35,000 won.
Same night , I bought another pair of boot for only 20,000 won.
Crazy , huh!!!!
When leaving for Malaysia , I was scratching my head on how to carry all this thing.... uwaaaaaa.... my luggage expanded. 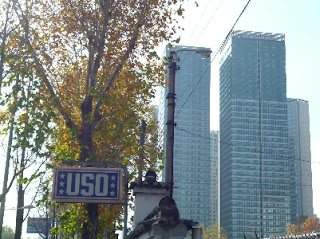 Thank God the USO office not so far walking from the subway station.
The weather was chilling cold.
This day trip organised by USO kooridoor who organised by UN  army there in south korea. My group basically the retired army from US and Europe country.
Only 4 asian , myself and another 3 , I guess one from Japan, vietnamese and philipines.
Many area can't even bring in the camera.... most of the time got to leave our bag in the bus.
When take photo need to aim towards the north....
We are not allowed to aim towards the south...
Reason... afraid the North will know more thing about South and they will come to attack!!!
Aisshhh... they are very serious about it you know... 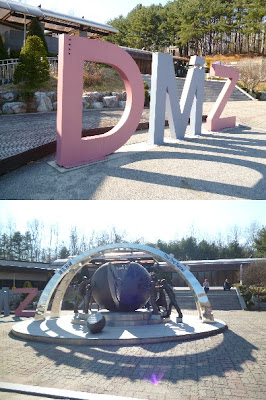 There you go DMZ (Demilitarised Zone) 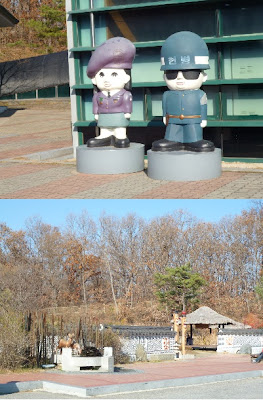 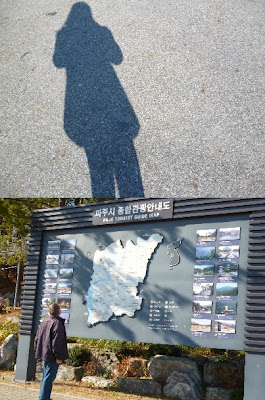 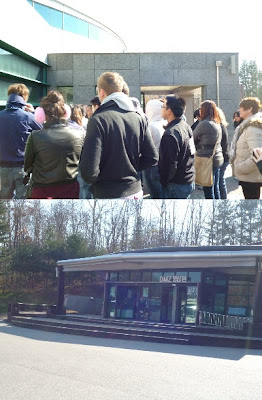 We all attended the briefing before going into the 3rd Tunnel. Before went into that tunnel we watched film on the history of North and South Korean and how these two suppose to be one , got divorce!
Going inside that 3rd tunnel is a challenge for me , since I have this call 'Claunstrophobia' afraid of small places...so I thought of not joining the walk into that tunnel. I heard it was small and also stiff down and up.
Then when I saw many white big size uncle and auntie who is very much older than me went in.... me ...feel the necessary to challenge myself.
aiyoh! that North korean very small but thank God the South korean already beautified the path. After about 10 minutes walked down . we came to the end of the tunnel, there is one small hole which is North korean path. I am basically in the North korea...yeah!!! I am here I am here....
Oh ya... there is spring water which is worth to taste because people says the spring water is very pure. Yup taste it and it taste different. Can't described that!
But my thinking was always ....making up up my own story...mmmmmm ... imagine all of us here went in then drink the water and we all praised nice , delicious, very pure and on and on and on....
Far from our imigination the North people is pissing from above with that evil laugh muahahahahaha...nice eh? pure eh? full of mineral eh?
When I think about my own story.... I was like....mmmmm... i just tasted north pissing ...full of mineral ....mmmm.. not bad eh??? serious!!! with this kind of thinking????? I need a doctor!!! 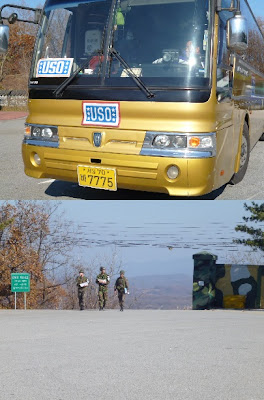 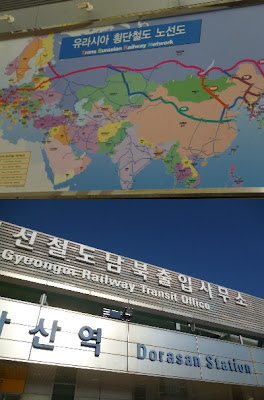 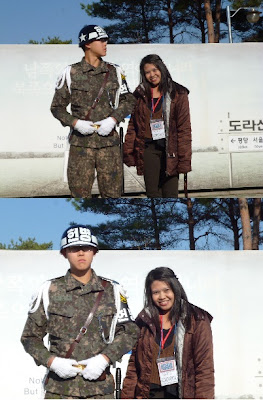 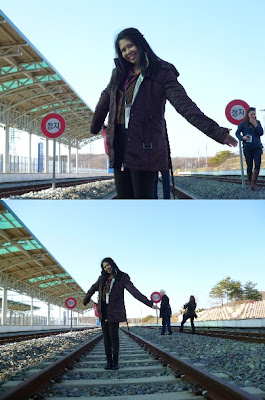 Thank you!!!
White Oppa!!!
for not laughing to my pose!!!!
I mean my half titanic pose in middle of Dorasan Station railway track!!!! 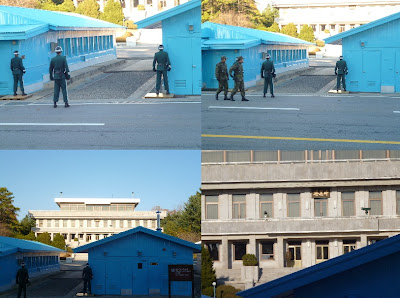 This is near the JSA (Joint Security Area)
There the North Korean building is right in front of us.
The stiff guard there... UN called them 'The Rock'.
Serious , that fella not even move or wink!!!!
I were told that 'The Rock' is highly paid and their room, I mean their dorm also is quite good.
I mean the way they told us is like it is worth for them to be ' The Rock' because they are well taken care by the govt.
You see the North Korean building, I mean not the blue one..... that small shot???
North Korean army...
Very interesting, while we are taking photo, can see that they are busy peeping through windows too.
right at the end of the blue building the North korean version of 'The rock is hiding behind the building...

How I feel during this trip????
Very tense up!!!
it was a goosebump inducing to me... when the military guide say...'to your left , is the first look at the communist area'. 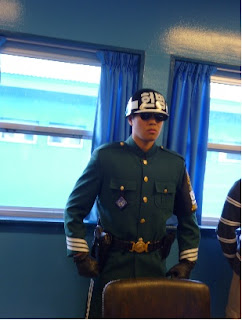 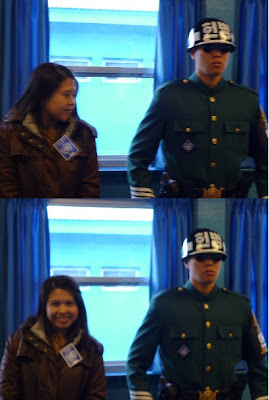 Look at my wild eyes!!!!
Cheh!!!
We need to stand a distance from 'The Rock'.
If not.... hehehehehe I will wrap my arm around him... muahahahaha...this 'dirty old woman' start her 'wild fantasy' again!!!! 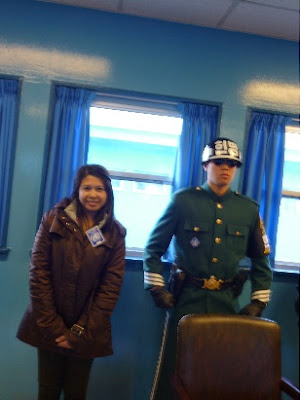 Leaning a bit towards 'The Rock'...
'The Rock' oppa, still maintain the same position...
Whoa!!!! so well trained huh!!!!
I can imagine these people have a tough time during their training...
Salute to you ' The Rock'.
Be alert and stay focus...Oppa!!! fighting!!!!
muakkkkksss!!!! two kiss from me.

Thank you to white oppa... for snapping this photo for me...ceh!!! your photo skills not much different from my skill. muahahahaha...
Guest what I am the smallest little girl among all this western group. 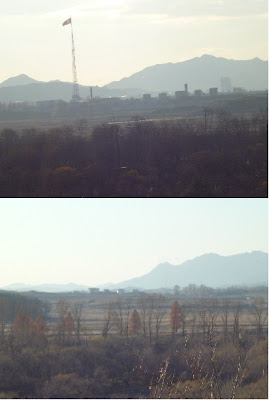 North korean flag rising high up.
My camera not so hi tech to shoot that pro paganda village but can view the Kaesong Industrial park from far. 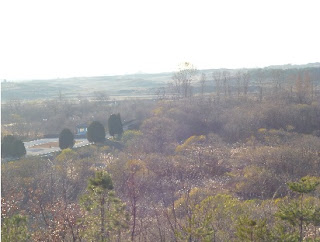 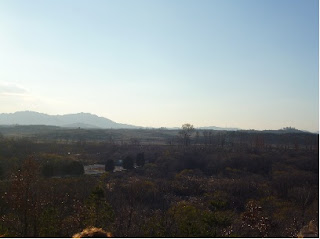 My tour guide story to us during the trip...
Do you know that the CEO/ Founder of Hyundai Motors was born in present day North Korea???
His family was very poor and the only own one cow. After moving to South , he became one of the richest men in the world. He feel sorry for his family in the North and never stop remembering them.
He built the Unification Bridge or many call as 'The Bridge of No Return'.
He know his family and North Korean are struggling for survival so he sent out 1,001 cattle into North Korea crossing this bridge. Nobody know what happen to all the cattle now.

During the mountain observation I was able to look into the North Korea and noticed that tree was gone and the mountains were bare. Totally different from South korea, with so many greens!
We were told the trees were removed because North Korea need all the room they can to grow food. If the tree starts to grow, they pull it out from the root.
We hear a lot about the North Korean policies and propaganda but less about the Northern people.
It is sad to hear the story about no trees are allowed just because want to grow food!
It was a painful reality!

I was told there are 25,000 Kim Il Sung 's statue all around North Korea.
mmmmmm.... make me think they have money to build the statue than feeding the people????

Whatever it is... this is just our perception after listening to all those stories... but the real situation only people there and God knows! 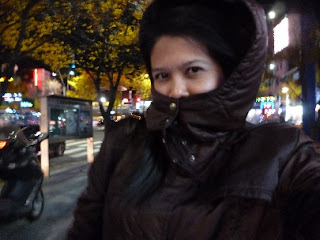 On the way back from USO office after the trip.
Tired!!!!
Weather was so chilling cold!!!!
The wind was like see my hoodies!!!!
Flying!!!!

Worth journey...many things I want to write in ....but as usual I have that Lazy thing with me....
I learn a lot about the north and south korea from the trip.
By cindyrina